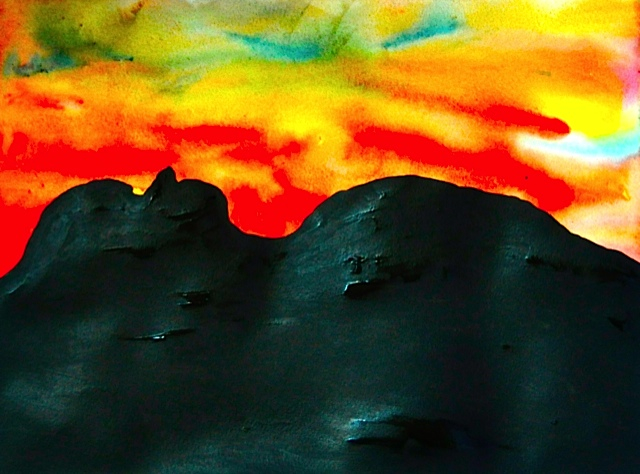 The giant Bulbowen was as high as the sky and as old as the hills.  For him years were as seconds, centuries as minutes, millenia as hours.  When he walked the earth shook and when it rained his footprints filled with water to make lakes.

One day, after years of walking, Bulbowen grew tired.  He had walked from one side of the earth to another and was weary.  He sat down, yawning and stretching.  He lay down on his back and closed his eyes.  The warm summer breeze caressed his eyelids and whispered lullabies in his ears, weaving a warm blanket of sleep around him.  For years Bulbowen slept.  For centuries he slumbered.  And as he slept the wind blew dust across him.  Year upon year, layer upon layer, the dust grew thicker and thicker, turning into soil. Birds dropped seeds on Bulbowen and, watered to life by the gentle rain, plants grew, spreading out their roots to hold the soil in place.

Millenia passed and, eventually, people came to the area.  They noticed the shape of the mountain; its outline resembling the silhouette of a sleeping giant.  They named the mountain Bulbowen, after the great giant of ancient legend.

The first people hunted on Bulbowen’s slopes, sleeping under trees or in bark shelters, moving on when the weather grew cold.  After many centuries they started building houses and farming in the flat land around the mountain.  A village grew up.  Children went to school.  People were born, grew old and died, all in Bulbowen’s shadow.  They took their recreation on the mountain, walking in its cool forests, skiing in winter and mountain climbing, although nobody ever climbed the highest peak, known as Bulbowen’s nose.  Legend promised disaster to anyone that tried.

Then, one day, the earth began to move.  The first tremors were small, barely discernible.  Windows rattled, crockery clattered, pebbles danced on the ground.  The quakes increased in intensity.  Buildings shook, trees bent and swayed in an eerie dance.  The people were frightened.  They ran out of their houses, workshops and schools.  The ground was moving violently beneath their feet now.  Boulders bounced down the side of the mountain and trees slid down in flurries of earth.  People grabbed their most treasured possessions and ran for their lives, across the plain, away from the mountain but still the rocks bounced around them and the tremors could be felt for miles.  They ran and did not stop running until they were sure they were quite, quite safe.

The mountain shook and heaved.  Every tree toppled and tobogganed down its slopes.  Great landslides were stripping the mountainsides bare.  Slowly, slowly the mountain changed shape.  It seemed to spread out for miles, then great tranches of land stretched up to the sky.  The top half of the mountain rose skywards as the giant Bulbowen rose to a sitting position, stretching and yawning.  He looked around him in mild surprise at the ruined houses, the fallen trees, that lay around him.  Then he rose to his feet, shook the last remnants of soil from his hair and beard and continued his walk.

When the people returned to rebuild their ruined houses they found a vast new lake where their mountain had been.  A new layer of fertile soil was spread across their farmland and hundreds of fallen trees lay scattered around to be used for the rebuilding.  So the people changed from skiing to water-skiing, and their recreation pursuits all centered on the lake.  They swam, fished, boated and wind-surfed in the vast body of water they called Bulbowen’s Bath.

Please send us short fiction, between 500-800 words for consideration for the website to transportationalmanac@gmail.com