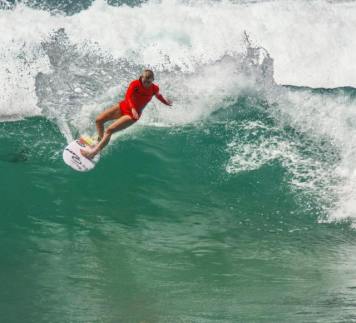 It’s good, once you’re in. That’s what everyone always says in Tassie, and that was what Lucy told herself then.  She began wading out, busting through the foamy lines, until it became deep enough for her to dive under. The first wave she dove beneath was gritty and sand-churned, and she frog-kicked below its turbulence with her eyes and lips firmly closed. The shock of the cold shuddered through her body. The second wave was cleaner, having exploded right in front of her into a heavy spray of bright white and crystal-clear droplets, which caught up the sunlight and tossed it about in shimmering rainbows. She plunged beneath it and buried her fingers in the sand, anchoring herself against the churning water. She brought her feet beneath her, pushed off the sand, and burst back through the surface, gasping into the sunlight. Her skin was on fire with the cold. The third wave reared up, just beyond her, and this time, when she dove, she opened her eyes, rolled onto her back and watched the way the turbulence of the breaking wave gathered in a series of foaming balls that passed above her like fizzing, liquefied clouds. ‘

Transportation Press will soon be announcing our publishing program for 2018-2019. In the meantime, we are posting anonymous quotes from novels we like. The first person to pick the novel will receive a free copy of one of our publications. Drop us a line.