He was a Sentinel.

The Sentinels didn’t have names, at least not in the human sense. If he could have picked something for himself he would have settled on “Metro”; a name he kept seeing on the masthead of the free newspapers that the humans liked so much. The word stood out on the front page, bold and constant; he aspired to these attributes.

It was with the newspaper that Metro found a kindred spirit; like the strange, papery object he too spent most of his days loitering on the tube. This was his beat. He sat for most of the day, absorbing the rhythm and rattle of the carriage, observing closely the behaviour patterns of his fellow travellers: aloof, restrained and noncommittal. The humans hid behind their sheets of newspaper, hungrily devouring it with their darting eyes, before throwing them over their shoulders to litter their vacated seats. A fickle bunch, thinks Metro. Ripe for a takeover.

He coughs and a small specked feather escapes from his mouth. He had been briefed about this: nothing

to worry about, Control told him. The disguise had yet to be perfected. The rest of the Bakerloo passengers conform to type and don’t register anything untoward.

Metro is learning the Humans’ reading habit, but he mostly looks at the pictures: glittering people waving as they walk into a cinema, a plastic-faced man holding a battered briefcase aloft, a bloodied child crying amid rubble. As a Sentinel it’s Metro’s job to learn what he can and these abandoned items are good tidbits for his report; all nourishing breadcrumbs for a curious intellect.

On the way to Charing Cross he puzzles over a picture of a human female; he has seen her image before and is aware that she has elevated status within human society. She is showing her posterior to the camera. Metro doesn’t understand this and ponders if the backsides of the rich do not fulfil their original purpose; are they purely ornamental? He makes a note. This is something to brood over later with Control.

There is no danger of Metro going native. Control had warned him about that too: previous expeditions had turned and lost their avian nature. Metro thinks he saw one once in Regent’s Park. She was in the form of an old woman who sobbed openly as she tore up hunks of stale bread which lay uneaten at her feet. Her former brethren watched indifferently from the trees, forbidden to descend and peck at the tainted crumbs. 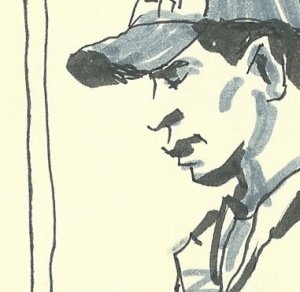 Metro is quiet and unmoving for most of the journey. It’s best for him to sit still; the disguise chafes his breast and his folded wings regularly cramp. There is some release when he reaches Charing Cross and he settles into the task of piloting his human shell to Trafalgar Square. His steps are tentative at first, but he eventually settles into a pattern, a stroll which syncopates with the bustle around him. Of all human activity, it’s walking that puzzles Metro the most. How did they cope with being
so earthbound all the time? Maybe this was why they distracted themselves so much with the rear ends of the great and good?

Metro bounds up the stairs to Trafalgar Square two at a time. He is showing off, trying to make a grand entrance. The crowds, too absorbed in taking photographs of themselves, fail to notice him. The birds sense his presence straight away; they immediately land and a silence spreads. They all look towards the corner where Metro is waiting.

A fat pigeon descends from Nelson’s hat and circles it’s way down the column, swooping over the silent brood. The pigeon gracefully lands at Metro’s feet.

Metro bends down and offers Control his hand. The pigeon rests upon his palm and is slowly elevated level to Metro’s face. The Sentinel launches into his latest report. After being confined to his disguise it feels good to revert to the old language once again.

Control listens patiently, processing all he can, hoping that among Metro’s theories on celebrity and transportation may lie the seed that grows into the humans’ final destruction. His flying army is ready, stationed on rooftops everywhere throughout the capital, ready to swarm as soon as the chink in the armour is revealed. Until then, the Sentinels arrive and share their knowledge.

Metro finishes his report and goes back to the tube.

Control flies upwards to his perch and defecates on Admiral Nelson. He continues his watch, making sure the world ends not with a bang, or whimper, but a bloody coo.

Tony Thorne’s illustrations, sketched while in London, travelling the iconic underground rail system will feature throughout the upcoming publication Islands and Cities, a collection of short stories by Tasmanian and London based writers. To celebrate this cross-cultural exchange, writers from the publication have each been assigned an illustration by Tony Thorne to respond to, for publication on our website.

About the size of a packet of cigarettes, the cheap plastic of the Buddha machine fits snug in my palm. It is simple- a speaker, a volume wheel, a switch, a red LED, a headphone port. A few basic circuit boards sit encased in what was once pristine white. I turn the wheel of the Buddha machine to its full volume and a loop begins to play in my ears. I close my eyes. Thirty seconds of gentle tones expanding and contracting, and then it repeats. I could turn the switch and another loop would come, but I am lucky. My breathing synchronises effortlessly with the ebb and flow of this first loop. I open my eyes.

It’s close enough to winter that the trees past the train windows are gilded with ragged leaves. People are wearing jackets, but not yet scarves or gloves. Everyone is too hot in this carriage. Past the noise of the Buddha machine, I can feel the train vibrate, I can almost hear voices. The loop is ambiguous- every noise that sidles past the headphones is incorporated until the train is breathing with me. Across the aisle men gesticulate and smile and talk. A girl is reading a book. A grey haired man looks pained as he casts his eyes around, oppressed by the weight of life pressed into the carriage. Beyond him in the gloaming I can see lights burning in office buildings.

It feels as if there is a larger pattern, as if the loop is changing, as if it draws out – there is not. The change is in the train and in the passengers. This loop is thirty seconds long. The man next to me is reading a free newspaper. I am tired.

We reach my station and I step out onto the platform and the train keeps going, and the loop repeats.

Tony Thorne’s illustrations, sketched while in London, travelling the iconic underground rail system will feature throughout the upcoming publication Islands and Cities, a collection of short stories by Tasmanian and London based writers. To celebrate this cross-cultural exchange, writers from the publication have each been assigned an illustration by Tony Thorne to respond to, for publication on our website.